Darwin’s Theory of Evolution completely explains the diversity of all life forms, both  flora and fauna.

Darwin’s theory of evolution is a theory that explains the history of life through geologic time; the diversity of living organisms, including their genetic, molecular, and physical similarities and differences; and the geographic distribution of organisms.

About “Theory” – to a scientist, a theory implies that something has been proven and is accepted as being true. A theory is developed only through the scientific method, meaning it is the final result of a series of rigorous processes. All scientific theories are well documented and proved beyond reasonable doubt

This website Evolution Explains Everything gives proof of evolution.

Here’s the outline of the proof for those short on time:

All available evidence supports the central conclusions of evolutionary theory; that species share common ancestors and therefore, life on Earth has evolved.

The “Tree of Life”

This is irrefutable evidence that evolution is the way that humans came to be.

The Tree of Life from DNA 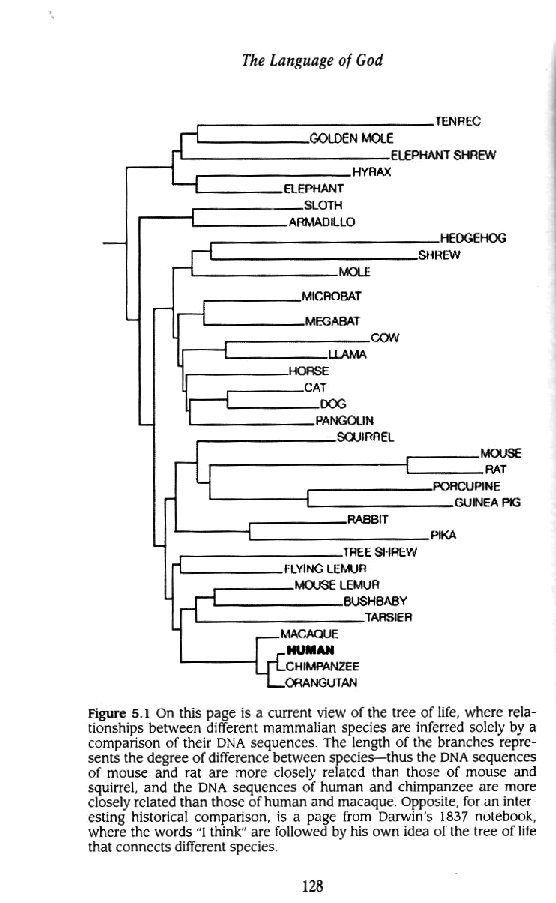 from Francis S. Collins, Project Director of the Human Gnome Project, Author, The Language of God

The Tree of Life from Fossil Analysis

Kick started by …….., scientists have discovered, by examining million of fossils that … was right. Life evolved from the simple cells to the complex homo sapiens.

Evolution is a historical science confirmed by the fact that so many independent lines of evidence converge to this single conclusion. Independent sets of data from geology, paleontology, botany, zoology, biogeography, comparative anatomy and physiology, genetics, molecular biology, developmental biology, embryology, population genetics, genome sequencing, cosmology, astronomy, chemistry, physics and other sciences each point to the conclusion that life evolved.

Evolution is supported by thousands of facts across multiple disciplines. None of the research was done to “prove” evolution. It was done to learn something about the researcher’s discipline. Using that independent research, one must conclude that evolution happened. Knowledge of the evolution of viruses and bacteria is vital to medical science.

Almost every scientific discipline has made contributions to the finding that evolution is true:

None of the . research, some going back hundreds of years, was done with the intent of “proving evolution”. When combined, it all . leads to the incontrovertible conclusion that evolution explains the proliferation of plants and animals. If you wish to dismiss their scientific evidence, you have to disprove some of their fundamental theorems for that is what is used to support the conclusion that evolution happened.To refute the theory of “inheritance” for example, you would have to be an expert in Molecular Biology. The same is true for each of the disciplines that contributed to the our knowledge of evolution.

While evolution is amazing, it is also full of waste. It is slow and circuitous. It makes and retains errors. It leaves vestigial structures in place. It uses the same structures repeatedly for different functions in impressive ways, but not the solutions of a Great Designer working on each challenge from scratch. And then there’s billions of years of innocent animal suffering on the way to making humans, the purported goal of creation. And along with that, calamitous, unpredictable natural evil. Neither the method nor the misery add up to a divine origin.

On the other hand, like all other scientific theories, evolution is falsifiable.

There are many things that could prove evolution is an incorrect theory. For example, If we found a general pattern of fossils in rocks dated to different ages than expected, that would be a problem for evolution. In fact there are hypothetical situations, which easily could falsify evolution. None have materialized.

Click HERE to see “What Darwin Never Knew”, an astonishing proof from PBS.

Radiometric Dating
(This link answers all the ridiculous superficial creationist challenges to the accuracy of radiometric dating.)

2. Stratigraphic provides a sequence of events from which relative dates can be extrapolated.

3. Molecular clocks allow scientists to use the amount of genetic divergence between organisms to extrapolate backwards to estimate dates.

Most of the coding sequences in DNA is not used in the construction of a human body. The sequences are a result of errors in duplicating the DNA when it splits. It’s called “junk” DNA. The same sequence of errors in the DNA appears in humans and primates.

It Couldn’t Have Happened by Chance

A young Richard Dawkins gives and excellent rebuttal to this old chestnut in THIS VIDEO where he shows that a computer, using cumulative selection. Cumulative selection changes things at random but where there is a movement towards a target, it does not destroy that which improves its status.

He also defeats the other chestnut – evolution cannot account for complexity; i.e. “the eye”.

Creationists prove their ignorance by saying something like “all through the fossil record and life, we don’t find an ape man”.

In fact there are many transitional forms. Check out these:

The Ambulocetus – an early cetacean that could walk as well as swim. it is a transitional fossil that shows how whales evolved from land-living mammals.

Tiktaalik – representative of the evolutionary transition from fish to amphibians.

Archaeopteryx  –  a transitional fossil between dinosaurs and birds

Walking Catfish  -a species of freshwater airbreathing catfish.  It is named for its ability to “walk” across dry land, to find food or suitable environments. It can survive out of water as long as it stays moist.

Now what makes you think that the God that created the Universe as we know it, would put life on this third rock from our G2V star? And then presume to care about each of the creatures on it?