The Christian God is presented as a loving, merciful, benevolent, just God. Man is evil, man has free will, yes but God is omnipotent and could triumph over the horrific events presented below if He wanted to. It is not possible to view any of the events depicted below as representing acts of a loving,merciful God. In fact, He is guilty of depraved indifference in all cases.

1. He allows young girls to be sold into the sex trade.

Child sex trafficking is the most heinous of all things that God permits evil men to do. Young girls, usually kidnapped or separated from their families are bought and sold and forced into prostitution. A loving God would not permit this. He could easily change the hearts of the perpetrators but He chooses to do nothing.

How would you feel if you were Nina’s father and learned that someone had stood by and watched her being raped and did nothing? Exactly!

Here God permits those who represent Him, those who people trust implicitly, to rape little boys. Since 2004, the Vatican has received some 3,400 cases, has defrocked 848 priests and sanctioned another 2,572 to lesser penalties. How can a loving God permit men who (people believe) can speak to God, to molest young boys? He chooses to do nothing.

3. He allows believers to kill each other over who has the correct understanding of God.

Since the days of the Inquisitions and the Crusades, God has allowed believers to kill each other because they have different versions of “the truth”. One of the most devastating examples of this indifference is God’s reaction to the Sunnis and the Shiites. Both are Muslim, both believe in the Abrahamic God, but because of slight differences in their theology, they kill each other – and God stands by without a peep.

A loving God would make it clear to all Sunnis, Shiites, Catholics, Christians, Lutherans, Protestants just who is right and how He would like to be worshiped. Instead, God sits by and watches those who worship Him, those who He “loves”, kill each other over doctrine. No evidence of a loving, just, beneficent God here.

This entire post could be consumed with a recitation of all the religious wars that have taken place. You know them. No need to belabor the obvious.

4. Because of the faulty earth He created, “natural” disasters kill, maim and ruin millions of lives.
Below is a picture of a distraught Japanese girl after the devastation of the 8.0 magnitude earthquake in Japan, 2009.

Of course there are many other types of “natural” disasters that the omnipotent, creator God has created:

In a “twofer”, God simultaneously inflicted a famine on Somalia in 2011 while permitting insurgents in the civil war to prevent aid from reaching those suffering from the famine.

Of course, there is nothing “natural” about these disasters. Because God is the cause of everything, he is the cause of every “natural” disaster. This is not the modus operandi of someone who loves those he kills in these natural disasters. In this case at least, we can’t say that God does nothing – He is completely responsible for the carnage brought on by His playing with nature. He must enjoy it or He wouldn’t do it.

5. Allows children to be born with birth defects, and mental deficiencies.

Notice anything strange about this young man’s knees?

Who but the omnipotent and omnipresent God is responsible for this? In fact, He’s even proud of it and brags about it.

6. Allows people to starve to death.

Over 2,000,000 people starve to death each year. The omnipotent, omnipresent God could easily prevent starvation – but He sits by and does nothing. No evidence of love here. 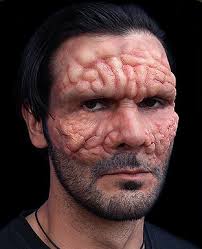 Jesus could have ended Leprosy for everyone, forevermore, with a wave of His hand if he wanted to. But instead, he chose to heal only those fortunate few that happened to cross his path. That’s not love; that’s taunting.

None of the aforementioned diseases are due to the fact that man is evil. Because God is the creator of everything including evil, (Isaiah 45:7 I form the light, and create darkness: I make peace, and create evil: I the LORD do all these things), one can only conclude that He deliberately selects certain people to receive these horrible diseases. This is not an act of love. It is cruel and malicious, arbitrary and depraved. But God must love doing it or, being omnipotent and omnipresent, he wouldn’t do it if he didn’t want to.

8. Consigns over 50% of the world’s people to a life of poverty.

While allowing a select few to live like Tom Brady. Here’s his $20 million mansion that he built and then sold – not enough room I suppose. Why?

9. Permits evil men to triumph over His love, over His will, over his “plan for us”; or maybe being murdered by evil men is God’s plan for his chosen people.

How is it that these evil men were allowed to murder millions without God lifting a finger? Their “free will” trumped God’s will … OR …it was God’s will that these murderers prevailed. In any case, this is not the action one would expect from a loving, omnipotent, merciful, just God.

And now we have ISIS declaring a Holy War and the end of the world, killing in the most hideous ways in the name of Allah (God). God could easily end this. All he would have to do is tell them they are wrong. Instead, he does nothing. Sits by and enjoys the carnage. If He didn’t enjoy it, He wouldn’t allow it.

10. And, according to the Bible, he condemns billions of people to Hell merely because they cannot believe that Jesus died for their sins. But, up until the moment they died, He “loved” them.

Epicurus Sums It Up Quite Well

Is God willing to prevent evil, but not able? Then he is not omnipotent.

Is he able, but not willing? Then he is malevolent.

Is he both able and willing? Then whence cometh evil?

Is he neither able nor willing? Then why call him God?

How can anyone love, worship and praise this monster?