Jesus promises that through prayer, you will receive exactly what you ask for. 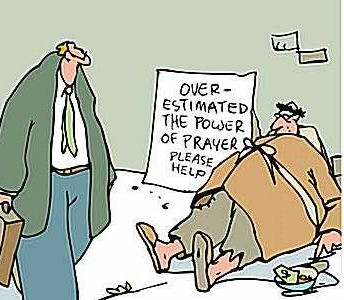 Here are the powerful words of Jesus that promise your prayers will be answered just as you ask. The full verse and citation can be found below.

Jesus promises to give you what you ask. The only condition for receiving “whatever you ask for” is that you have faith (in God, the father; not in Jesus’ resurrection obviously… he wasn’t even dead yet) and do not doubt. There are no other conditions. He says you will receive  “WHATEVER/ ANYTHING ” you ask.

No prayer that requires supernatural intervention has ever been answered. Among a billion possible examples, we cite the facts that:

How do we know?

Here is a list of 10 “miracles” people cite as proof that miracles occur. To save you the time of checking out the 10 “miracles”, here is a summary of the miracles:…

If we know about these trivial nonsense “miracles”, we would certainly know about real miracles such as those listed above. A bona fide miracle would cause headlines in all newspapers all over the world. There would be before-and-after pictures, numerous appearances on religious TV stations, YouTube, etc.

One of these alleged miracles, Our Lady of Lourdes, has millions of visitors a year based merely on a 14 year old’s claim that Mary appeared to her. Isn’t it sad that these “miracles” are devoid of anything more significant than apparitions, stigmatas, and bleeding statues?  Who cares? What proof of God’s desire to intervene in a person’s life are these 10 “miracles”?

Here are the verses where Jesus promises that prayer will work for you. Jesus places no conditions on these promises other than that one believes and has faith. In fact, Jesus prefaces some of them with words that accentuate the veracity of the words to follow; e.g. “Truly I say to you”,  Truly, truly I say to you”,  “I tell you the truth”, etc.

For truly, I say to you, if you have faith as a grain of mustard seed, you will say to this mountain, ‘Move from here to there,’ and it will move; and nothing will be impossible to you. Matthew 17:2

Again I say to you, if two of you agree on earth about anything they ask, it will be done for them by my Father in heaven. For where two or three are gathered in my name, there am I in the midst of them. Matthew 18:19

I tell you the truth, if you have faith and do not doubt, not only can you do what was done to the fig tree, but also you can say to this mountain, ‘Go, throw yourself into the sea,’ and it will be done. If you believe, you will receive whatever you ask for in prayer. Matthew 21:21

And all things, whatsoever ye shall ask in prayer, believing, ye shall receive. .Matthew 21:22 (Our favorite – so simple, just believe – in God the father by the way, not in Jesus’ resurrection!)

Therefore I tell you, whatever you ask for in prayer, believe that you have received it, and it will be yours. Mark 11:24

“Behold, I give unto you power to tread on serpents and scorpions, and over all the power of the enemy: and nothing shall by any means hurt you.” Luke 10:19 (Hmm… and the evidence for this is what?)

John’s “quotes” from Jesus are different from the other Gospels. Here we have a total switch in the responsible person. Jesus does now say that answered prayer does require belief in him, Jesus.

“Truly, truly, I say to you, he who believes in me will also do the works that I do; and greater works than these will he do, because I go to the Father  John 14:12

If ye abide in me, and my words abide in you, ye shall ask what ye will, and it shall be done unto you.  John 15:7

James is back to requiring that you have faith in God, the father, that HE, the Lord may give it to you.

Ye have not chosen me, but I have chosen you, and ordained you, that ye should go and bring forth fruit, and that your fruit should remain: that whatsoever ye shall ask of the Father in my name, he may give it you  James 15:16

And the prayer offered in faith will make the sick person well; the Lord will raise him up. If he has sinned, he will be forgiven. Therefore confess your sins to each other and pray for each other so that you may be healed. The prayer of a righteous man is powerful and effective. James 5:15,

Is any sick among you? let him call for the elders of the church; and let them pray over him, anointing him with oil in the name of the Lord: And the prayer of faith shall save the sick, and the Lord shall raise him up; and if he have committed sins, they shall be forgiven him  James 5:15-16

There are no external writings telling about about multitudes of sick people who recovered after prayer. We only read, IN THE BIBLE, that Jesus healed a few who happened to be in his vicinity. Why didn’t he heal all lepers all over the world? Hmm? He allegedly had the power to do so.

No Wiggle Room For These Two Verses

Christians can create amazing excuses when confronted with the reality of unanswered prayer.  But there is one that cannot be danced around. That is the prayer that promises to heal the sick. Once the prayed for person has died of the disease the prayer was intended to prevent, it is obvious that the prayer of faith DID NOT cause the patient to “recover”!

And these signs will accompany those who believe: in my name they will cast out demons; they will speak in new tongues;   they will pick up serpents, and if they drink any deadly thing, it will not hurt them; they will lay their hands on the sick, and they will recover.  Mark 16:17-18:

Since Mark wrote 40 years after Jesus death, the probability of Jesus having said those exact words is zero. More convincingly, however if Jesus really said “lay hands on the sick, and they will recover” (or drink deadly things), then people would have tried to heal their sick loved ones. After the sick failed to recover, Jesus would have been stoned as a false prophet. He would have been exposed as the charismatic nomadic preacher that he was. HE WOULD HAVE BEEN KILLED! Get it?

If you disagree, let’s hear what you have to say.

And all things, whatsoever ye shall ask in prayer, believing, ye shall receive. .Matthew 21:22

No room for equivocation there is there! WHATSOEVER YE SHALL ASK IN PRAYER, BELIEVING, YE SHALL RECEIVE.

In  the links below, we have two prayers we would like a believer to pray for us.

Please Note: It doesn’t seem to us that prayers are truly answerable by an omniscient God because he would have already envisioned the concrete results of the future. Prayers are asking Him to change what he knew would happen.

8 comments on “Prayers Are Not Answered”